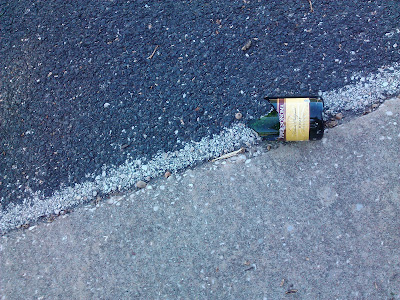 The room is dim without being poorly lit. Two well dressed, attractive men sit at an ornate wooden table playing chess. The board is ebony with inlaid marble, the pieces are ivory. At one side of the board sit three white pawns, a white knight and a white bishop idling atop the oaken table near a quarter-full wineglass. At the other end sits a black pawn and rook by an identical wineglass holding only the last red dregs.

Playing white is a man with short, silky-smooth hair, his face clean-shaven, his eyes bored of the world. With his every gesture he silently cries out that it is this - only this! - which staves off the ennui of his drab, overly comfortable existence. His white linen shirt is crisply starched and tucked without a crease into perfectly pleated khaki pants. His immaculate jacket was the socket for precisely five flawlessly polished brass buttons- one on either cuff, two along the middle and one above the waist pocket. The thick material of his jacket is dyed a deep navy blue.

Opposite him a man responds with black, the sharp creases of his khaki pants matched by the perfect stiffness of his white linen shirt. He alone knows the sad exhaustion of living, a pain he holds behind a clean-shaven face, beneath silky-smooth hair cut fashionably short, though perhaps the smoldering dullness sat within his eyes. Upon his jacket, itself without material flaws, rested five ornate and finely kept brass buttons, two along the middle, one on either cuff, and one above the waist pocket. The thick material of his jacket is dyed a slightly lighter navy blue.

The man in the darker jacket lifts a white pawn off the board. "Ah, what a metaphor, the pawn! Consider, for what am I in my empty and comfortable life but a pawn of my father! And yet, like the pawn I move forward, for how else would I maintain the consumer luxury in which I am entrapped without the un-opposable hand of his wealth!"

The man in the lighter jacket looks away from the board, away from his fellow, into the darkened space at the side of the room, "Perhaps I hear truth, good man, but how should I, so blinded by my comforts, recognize so sublime an essence as truth?"

"Nay," replies the man in the darker jacket as he places his piece, "what are we without our truth? For us, to whom the beauty of ignorance is denied, what then could be left?"

"I fear for my very soul, though such a thing has long departed from me, but you have placed yourself in check." replied the man in the lighter jacket.

"And yet," continued the man in the darker jacket, "Have not we all done so? Do we not live our lives in fear of that terrible check?"

"There may be your truth," insisted the man in the lighter jacket, "That it is not the world-weariness of the sophisticate which paralyzes your action, but a baser motive."

"Your words, as meaningful as any words," replied the man in the darker jacket, "mere shaking within the air, and yet lessen themselves in context. As the sage would say, they are but green dream sleeping furiously."

"Tame your language," pleaded the man in the lighter jacket as he idly lifted his wineglass to his lips. He forebear from drinking and said instead, "I sense within me a wroth wholly foreign to my consumptive nature."

The two men attempted to scowl, though neither could summon the desire to put for the energy required. The man behind his chair accomplished only a mildly disappointed glare, while the man in the darker jacket took on the appearance of one stricken with a mild food-borne illness.

The man in the darker jacket pronounced the following, "It seems to me, old friend, that you have come to delight in the worldly."

The man in the lighter jacket replied, "I take no pleasure from this drab and empty existence, noble comrade. I had thought myself numb by find pain within the vacant shard of my soul to see you acting the courtesan, pursuing the fleeting drama of this life."

The man in the darker jacket reached forward with his right hand and grabbed the stoppered wine bottle by the neck. He lifted it upturned into the air, as much Gorbachev's Shoe as Thor's Hammer. He spoke, "With the shattering of this bottle, I shatter our association, our mortal friendship." He brought the side of the bottle down upon the thick edge of the heavy oaken table, striking just above the label. "And with the upper shards of this neck, I will cut you as befitting a disobedient woman-for-hire."

The man in the darker jacket reached forward with a slow, controlled thrust, striking the unmoving arm of his one-time counterpart.

The arm of the man in the lighter jacket became a metal plate, spreading out from his flesh as he rose to a greater height. He was ten feet high, then he was twenty, every step of his mechanization matched by the man in the darker jacket. Missile launchers sprang from his shoulders and rapid fire large caliber guns from his arms. His eyes fired lasers.

The two giant robots fought to the death through the streets of Old London, the lower half of their shared wine bottle forgotten in the road.

Posted by entirelyalive at 12:00 AM