It isn't actually my neighbor, but rather the neighbor of the office complex where I work. There is a lot with a house set far back behind trees next to a major road on my way to work. I don't actually know for certain, but it looks like a house that was built here back when Austin was a small town and now it is in the middle of a fairly bustling mixed-use neighborhood set between suburban housing, apartments, office buildings, and a good smattering of retail-grocery-restaurants. I had sort of assumed that at this point whoever owned it was holding on to it for personal reasons, because it has been worth a lot of money for a lot of years.

A For Sale sign went up over the summer and came down in late autumn. Perhaps the personal reasons went away, and perhaps the inhabitant simply woke up one day wanting a giant pile of money.

Then a week or two ago a sign was posted on the property by the road announcing that the new landowner had applied for a zoning permit, with the case number of the zoning permit written on the sign. I was excited because if it was new business space then I could be getting a new lunchtime destination. If it was higher density housing then the existing local restaurants will be more profitable, possibly spurring more growth in that little retail block. So I went online and looked up the case number in the zoning office. It turns out they are re-zoning to "Condo/Townhouse" designation, which could include apartments, but that isn't the point.

Here is a man who purchased a piece of land with the intent of improving his life by providing housing for a large number of people. And here I am, bored at work, peering into the intimate details of his financial life. He doesn't appear to have anything to hide, but why on earth is the city requiring that he put up a huge sign and post all manner of data to the internet?

It is part of the cost the city extracts from this poor man-- public notice with the very real possibility of public shaming for the sin of daring to request an alteration to the Great Plan Of The City Instituted By Our Wise City Fathers. But, of course, it is not the only cost extracted by the city, because in order to provide much needed housing in a rapidly growing city this man must first obtain permission.

When this builder went to the previous owner of the land, he likely said something to the effect that he would give a sum of money for ownership of the land. But neither party truly owned that land. Land ownership is a fiction in modern America. He had Permission from the city to reside there with his family. Now he must get Permission from the city to use the land for something else.

When I was young, I had a friend with a subscription to Nintendo Power magazine which he would occasionally bring to school. When I asked to borrow it, he would say, "sure, but don't spill anything, and give it back before lunch time is over." I received Permission, premised on certain conditions, to read the magazine. When I handed back the magazine, I imposed no such conditions on him. That was because he was the owner of the magazine, and I was merely granted access through the benevolence of a friend.

This landholder is not, in fact, the owner of that land. Every square inch of the City of Austin is owned by the City, and the city is benevolent enough to grant us permission to reside within her warm confines so long as we abide by her arbitrary and ever shifting conditions. This landowner must receive the following permissions from the city for the privilege (not the right) of constructing a set of apartments: 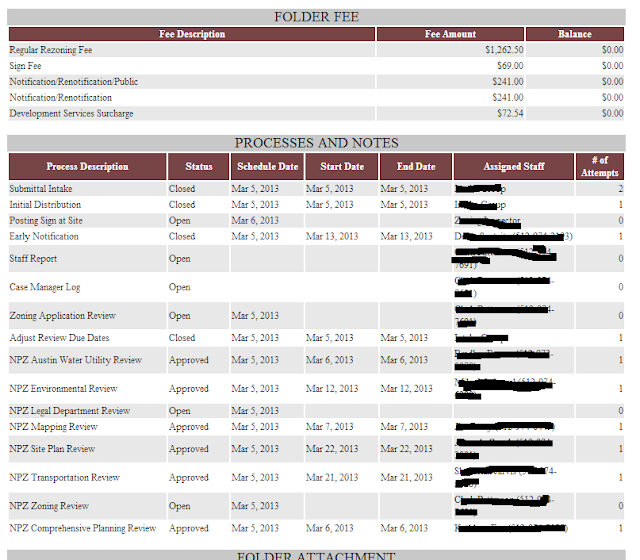 The best part? There is no arbitrary singular tyrant. I, as a citizen of the city, could take the day off tomorrow, walk into the zoning office, and inform them that, in my opinion, the re-zoning would negatively alter the character of the neighborhood. I haven't got the slightest idea if I would win that fight, which should say something right there, after all, I am not the rightful owner of that land, and something as nebulous as the "character of a neighborhood" is not a commodity which can be owned, and yet as a citizen of the city I am entitled to act as if I am at minimal personal cost, but even if I did not, a zoning battle can cost this man thousands of dollars in lawyers and the mere threat could freeze the project where it stands if the margins are thin enough.

I suspect no one will contest this, and I suspect that it will go through as quickly as any zoning change ever does. The landowner in this case is large scale builder and manager of apartment and condo complexes around the state and no doubt has a specialist or two doing nothing but managing the permitting of their acquisitions. But that, in its own way, is a bit depressing, since it means that this petty tyranny will be silently legitimized and the very notion of a Right to Property undermined once again.
Posted by entirelyalive at 1:11 PM