My last post explained, in my usual rambling incoherent manner, why I am going Soylent, that is, adopting a diet consisting exclusively of Soylent. This, of course, is not an original idea, going back at least to the Charleton Heston movie, and likely well before, but this particular experiement was incited by Rob Rhinehart's own attempts, chronicled here.

The experimental procedures are fairly simple. I built a spreadsheet comparing ingredients to the FDA daily recommended intake, then bought those ingredients, then measured them out, then put them in a bowl of water, then ate them. And also ate nothing else the whole day.

Before beginning, my goal is to find a cheap, easy, and nutritionally complete food source. I have already discussed the upsides.

I anticipate, for downsides, that I may miss whole foods, especially with regaurds to taste. I can, of course, experiment with flavoring as the project continues, but if it tastes bad overall, I am in a spot of trouble. Additionally, there is the risk, which I am almost certainly under-counting, that I have missed some key ingredient and will suffer a nutritional deficit.

Finally, this should go without saying, but I am not any kind of expert. Do your homework before going Soylent, and if you have a bad experience, that's what you get for taking nutritional advice from the internet. If you live in a state or nation where nutritional advice requires a license, come move to Texas, and in the meantime consider this blog to be an active protest against speech and occupational tyranny.

I began by ordering the things on the spreadsheet above. When they arrived I sorted everything and took a picture:
I then began to measure out 300g of bran and stick it in a thermos. Then I realized that 300g of bran is 900ml of space, nearly filling my 1L thermos. My first adjustment was to cut the entire recipie in half (since I was going to take half twice a day in any case) and pour it all in a bowl. I will attempt to consume this product like cereal. The rest of the mixing occured without incident, though I realized that my 1g scale is not sensitive enough to properly handle the half recipie, so tomorrow I will again be attempting the full recipie.

With all the dry ingredients it looked like this 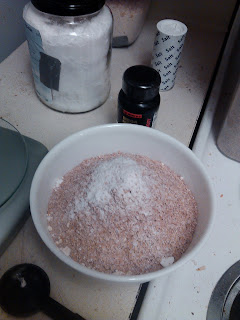 Then I poured in the 30g of Olive Oil and then figured I didn't have to meter the water, since it is just the medium. I ended up with this

This video may or may not work
Which, if you can't tell, is a bit too runny to eat with a spoon and not runny enough to drink, leaving me with a middle-mush. Then I sat down to write this.

Then I took a bite. The taste is not nearly as bad as feared, and tastes rather like frosted wheaties. Honestly, it doesn't really need flavoring, though I will eventually be experimenting with assorted spices. The texture leaves quite a bit to be desired, so I will be experimenting with the Jello this evening.

There will be an update on hunger and feelings with tomorrow's Soylent update, but overall today has been a qualified success. The concoction is clearly edible, if a bit too sweet, and a third of the way down the bowl I am already getting feelings of satiation. If I can get it to a drinkable consistency, filling two 1L thermoses a day and then consuming them slowly, one at work and one at home, may be the optimum route, though it is a departure from the Single Tiny Food Cube ideal.

EVENING UPDATE: So, less successful than I had hoped. The problem is the wheat bran, which is substantially less dense than I had anticipated. 300g is about four cups, comes out to two completely full bowls which is, frankly, more material than I eat on a normal diet. Plus the fact that bran is terribly abrasive in the throat and I never could figure out how to prepare it in a way that would make it convenient to eat. I even tried baking it with honey in an attempt to get a "granola-bar" effect, but I think the amount of honey necessary would overwhelm the amount of bran. Also tried making a suspension in Jello, but the amount of gelatin required to suspend that much material was prohibitive. I found that I was making a less tasty, more complicated form of oatmeal.

So I have cut wheat bran out entirely. I may return to it later (After all, I have the better part of 20lbs sitting in a cabinet now), but for tomorrow I will move to a recipe closer to Rhinehart's original formula. I still haven't reached the desired level of calories per volume (the main problem in getting the overall volume to a manageable level), and I am hesitant to add more olive oil.
Posted by entirelyalive at 12:07 PM

Email ThisBlogThis!Share to TwitterShare to FacebookShare to Pinterest
Labels: Soylent